Boy, what a week for Star Wars news! First, Collider reports that Lucasfilm is halting production on the spinoff films. Now we are hearing that ABC News has confirmed that there is no slowdown on the still unannounced spinoffs!

Holy karabast, things are getting intense!

ABC News reporter Clayton Sandell has confirmed with Lucasfilm that there is no stopping the unannounced spinoff films of (possibly) Obi Wan Kenobi and Boba Fett. 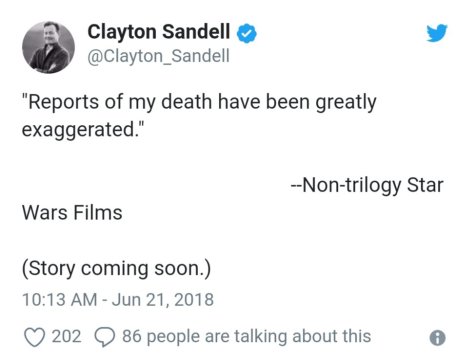 Lucasfilm told ABC News there are still “multiple” Star Wars films currently in development that have not been officially announced.

So this means that we can still have an announcement from Lucasfilm sometime in the near future, regarding production of a new spinoff film — hopefully Kenobi or Fett!

It also means that Lucasfilm may want to start playing coy when it comes to announcing projects especially when all of the bugs haven’t been worked out yet.

Either way, expect to hear more when it breaks right here at Another Star Wars Page!